Behind the Photo: Maroon Bells Winter 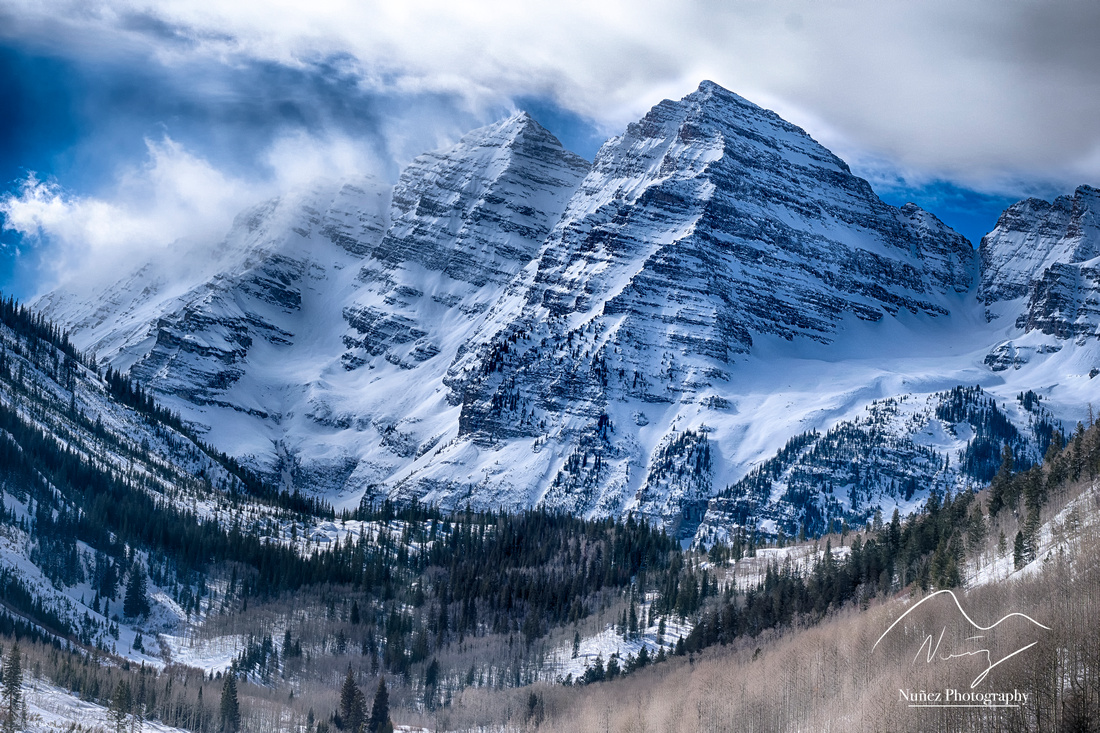 I am delighted to share that three of my photos were selected as finalists to be on Colorado drivers licenses beginning in Fall 2021. While the public decides on which photo they like the best, I thought it would be fun to share the story and personal meaning of each of the images. At the end of the day, I'm so proud to live in Colorado and hope that my photos bring a smile to face of anyone who may see them. To learn more about this contest and to vote on your favorite, please visit https://dmv.colorado.gov/iconic-colorado.

In early February 2020, a massive snowstorm swept through Colorado, dumping multiple feet of powder across the high country and shutting down I-70 to tourists for the weekend. The weather was so severe that even the hardened residents of the Roaring Fork Valley enjoyed a snow day, as schools and offices shut down. After a full day of wipeouts on the ski slopes, I was particularly sore the next morning as I met a friend shortly outside of Aspen for our cross-country ski trip to the iconic Maroon Bells. I had never been on XC skis before and I was dreading the long day ahead of me. Despite the avalanche danger along Maroon Creek Road and the lack of wax on the bottom of my skis, the day was one I will never forget.

The Maroon Bells are easily recognized as perhaps, the most iconic scene in Colorado. For years, the Bells have graced postcards and tourism ads, and have been host to millions of tourists from around the world. Over 300,000 of visitors come to view this spot each year, with the Fall as the most popular time of year. The twin peaks, North and South Maroon Peak, are among Colorado's "fourteeners" at elevations of 14,019' and 14,163', respectively. Known as the "Deadly Bells" in the mountaineering community, the ascent is particularly dangerous due to the fragile nature of the mudstone which gives the mountains their iconic maroon color during the summer. The peaks sit on the border of Gunnison and Pitkin Counties, in the heart of the Elk Mountain Range and the White River National Forest. Due to overcrowding during recent summer tourism seasons, the area has become an active case study in human environmental impact, and now requires a permit to visit with shuttles replacing passenger cars during peak times.

Due to the heavy snow of the days prior, my XC ski trip was uninterrupted by the snowmobile tours which typically run up Maroon Creek Road during the winter. By the time we had reached Maroon Lake, some 6.5 miles later, we were the only two people in sight, a rare occurrence for such a popular destination. Following a brief lunch of some pre-packed sandwiches and fruit, I trudged through the snow to capture a photo of the snow blowing off of South Maroon Peak. My previous visits during the summer had yielded great pictures, but something about the solitude and harshness of winter lent a particular beauty to the image I ended up with. Despite the framing of the photo which suggests otherwise, the day was marked by a bluebird sky and very little wind - it was just hovering above the peaks when I needed it.

To this day, my photo of the Maroon Bells marks my last, great memory of life before the time of COVID-19. Nevertheless, I am fortunate to live just a short drive away from this national treasure, and I look forward to making another winter excursion up there soon!